The Most Dangerous Game was written and directed by Justin Lee (Hellblazers, Hunters). His script is based on Richard Connell’s short story of the same name. The movie stars Chris ‘C.T.’ Tamburello (Habitual), Casper Van Dien (Assailant, The 2nd), Elissa Dowling (Slice and Dice, The Electric Man), Judd Nelson (A Tale of Two Guns, Relentless), Randy (Mid-Century, Last Shoot Out). It’s about a father and son who are shipwrecked and trying to stay alive while being hunted by a big game hunter looking for a new thrill.

The Plot: The common short story about a man who hunts another man has been on screens many times. Sometimes it’s changed, and sometimes it’s based on something else. But this is one of the few direct adaptations of a literary classic, which makes it a bit different but not less predictable. 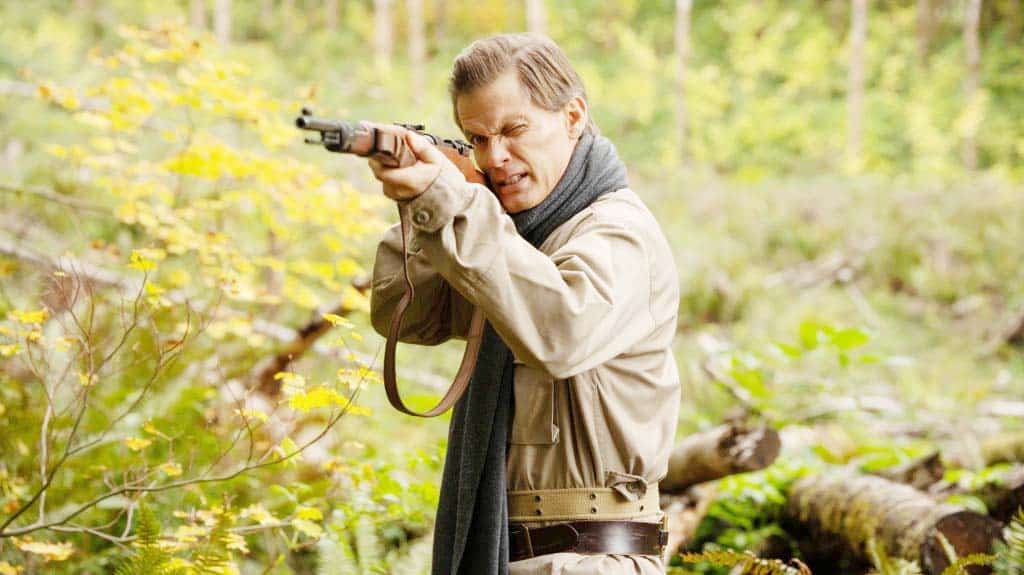 The trappers Sanger (Tamburello), Marcus (Nelson), and Rex (Charach), along with their friend Whit (Dern), are on their way to the Kodiak Archipelago to hunt the local brown bear when their ship sinks, leaving the trappers stranded and Whit dead. Thanks for giving me about 8 minutes of screen time, Dern. As the three men head toward the sound of gunfire, they run into Von Wolf (Van Dien), who they soon find out is not a good person. The audience, on the other hand, will already know that because the premise has been told so many times.

After a long discussion about the rules of the hunt, Von Wolf “offers” to get out of the game. He won’t take no for an answer, as Rex’s death shows, when he tries to get out of the hunt. Aside from adding these extra characters to explain things and adding others, like Mary Dowling and Benjamin Berenger, to help Sanger, the changes from the short story are small. In a direct adaptation, it makes sense to stay close to the source and keep the movie’s focus on Sanger’s survival. However, the short story was just that, and this movie doesn’t add anything meaningful to fill in the gaps, making it an okay but unremarkable choice.

The Characters: When Lee had the chance to properly develop the characters from the original story, he changed the details and identities for mostly semantic differences. He was trying to say something about life after the war, but his script didn’t get much out of the idea and left the characters flat as a result. At first, setting the movie after World War II and making Sanger a war veteran seems like a good idea, but it doesn’t work out that way. His behavior doesn’t show anything about his time overseas because he doesn’t act like a soldier. He encourages sleeping instead of being active and has very few survival skills. Also, there isn’t much of a backstory. The only thing that gives it away is a few flashbacks of a man running and some explosions. He tries to pull away from reality, but he does it wrong, which makes him look more lazy than traumatized.

Baron Von Wolf is a clear example of a typical German type. In all fairness, Zaroff’s character in Connell’s story wasn’t that different. What’s different here is that the script tries to make a point about bloodlust, which doesn’t go well with Von Wolf’s oddities. This wasn’t an issue in the short story. He’s a bit over the top here. He’s been mean since he was a child, and it’s spread to several different kinds of animals. Now he can only hunt one kind of game, but he’s already killed it, as shown by the wall of skulls in his house. He’s a good bad guy—crazy and cartoonish enough—but he doesn’t belong in this movie.

Supporting characters are as boring as Sanger, which makes the huntsman the movie’s highlight because the script gives him a chance to shine in a way that the rest of the cast didn’t.

The Thrills: In a movie like The Most Dangerous Game, it’s not hard to figure out what the director and script will do to make survival believable and give downtime a level of foresight about upcoming enemies, and Lee has no plans to break the rules. The first third of the movie is about the plot and what passes for character development. Once Von Wolf starts talking about his plan for the hunt, the movie gets a jolt out of the death Rex. The scene is a bloody mess, with the man’s head being bashed in (though it’s not very clear), Samuel getting shot, and Sanger being knocked out cold. It has the violence that Von Wolf talked about, which shows that the claims of violence are true.

Unfortunately, everything goes downhill from there. The pace slows to make room for Mary and her brother, but the brother is only there because the movie needed more action, since he only lasts three minutes before being killed in a stupid and predictable way. The movie should be focusing on traps and surviving in this scene, but it doesn’t do a good job because the script gives the three targets a small cabin full of supplies, including grenades and bullets. This removes any danger from the setting. Even here, traps only show up once and don’t work, leaving the main idea empty.

Von Wolf’s rooms are full of stuffed animal heads and taxidermied full bodies because he’s not very good at what he does, but when he goes up against a character like Sanger who doesn’t do much, he’s nothing. Even when his targets aren’t trying to hide at all, he walks right by them without giving them a second thought. After getting scratched by a falling tree (the only trap), he leaves the woods (and the movie for 25 minutes) to treat his wound. This well-done outburst doesn’t mean anything if the rest of the movie doesn’t build on it.

This premise always holds the promise of excitement, but Lee didn’t deliver on that promise. There was only one short moment of tension, and it wasn’t even about the main idea of the movie.

The Technics: Independent filmmaking has a lot of risks, but a director and crew should be able to develop a style for their work and learn how to work within limits with time and experience. Even though Lee has made more than a dozen movies in the past four years, he has only just started to get close to this.

It can be hard to afford the equipment, and that’s clear in The Most Dangerous Game. The audio isn’t great, with stock sound effects used often and background noise picked up and left in the final cut, and the visuals aren’t much more than static camera placement in wild environments. Action scenes like gunfire and explosions are barely there, but they are made digitally, which doesn’t work well with the story’s need for a simple setting. From the most important points of view, it’s a mess.

Writing and dialogue are also big problems in this book. The setting is just after World War II, but the characters say things that sometimes sound right for the time and sometimes sound like they were written in the present day. Every conversation jumps from one time period to the next, which makes it hard for the actors to do their jobs.

It’s hard to find an adaptation of The Most Dangerous Game that stays true to the book, and Lee’s version is one of the few that does. However, that doesn’t make up for the weak characters, technical problems, and almost total lack of excitement. There’s always the show next week. And FilmTagger can always recommend something similar but better.