I didn’t plan on seeing Shark Bait. After watching Great White and The Requin, I was tired of seeing annoying idiots float around trying not to become a CGI shark’s dinner. But I saw that Tower Block and One Shot were also directed by James Nunn. He was also the second unit director for 47 Meters Down and the movie that came after it. So he should know a few things about shark movies, and this shouldn’t be another flop, right?

Nat (Holly Earl, Beowulf: Return to the Shieldlands, Once Upon a Time in London) and her boyfriend Tom (Jack Trueman) are in Mexico for Spring Break with their friends Greg (Thomas Flynn, Little Fish), Tyler (Malachi Pullar-Latchman, Open All Night, Hunted), and Milly. The movie was actually shot in Malta, which would have made for a more interesting setting (Catherine Hannay, Doctors). They drink all night and then decide to go jet skiing the next day. But because the rental office isn’t open yet, they decide to just “borrow” a pair of them, even though Nat doesn’t like the idea. 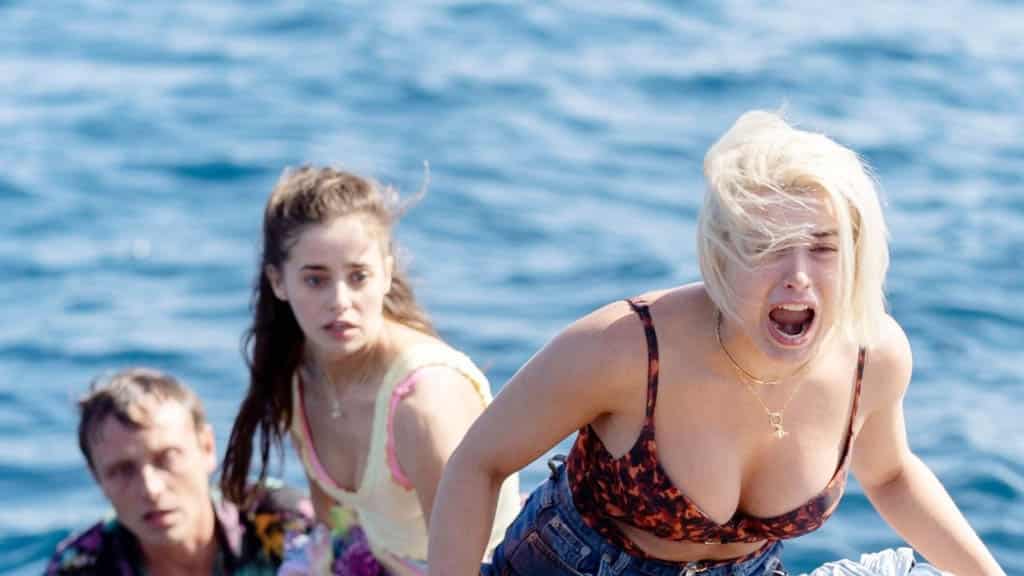 We can all see that this won’t end well, and it doesn’t. When they crash their jet skis while playing chicken, one of them sinks and two of them get hurt. Now, they are all stuck on one jet ski and can’t see the shore. As you might have guessed from the name of the movie, he is at the mercy of a big, hungry shark.

Writer Nick Saltrese (Hollyoaks, EastEnders) filled Shark Bait with the usual group of annoying idiots who just want to have fun and make bad decisions. We also see the obvious last girl, who isn’t sure she wants to go, but does so anyway. Saltrese also has a lot of drama, which doesn’t come as a surprise since he used to work on soap operas. That’s not always a bad thing. The writer of Hollow wrote for many of the same shows and made human drama a big part of the plot. But here, people fight over things that aren’t important, like the fact that Tom was having an affair with Milly and it came out. Given Nunn’s past work, it’s not surprising that the jet ski crash in Shark Bait looks good. But the footage before it is a disappointing mix of obvious green screen shots, high-altitude drone footage, and a few shots where it’s clear that the people in the shot are stunt performers and not the real actors.

Shark Bait does get better once the shark shows up. Nunn films the attacks with a lot of energy and more blood than you might expect. There are also some nightmare-like parts, like when a character gets stuck on a body that the shark is pulling off. Unfortunately, there aren’t enough of these moments, and most of the time Shark Bait just follows a formula. From a beggar who lost both legs to a great white shark to characters who die when they are close to safety, you can pretty much tell who lives and who dies, and in what order. That doesn’t stop the movie from having some jump scares, but it does mean that there isn’t much real suspense.

As expected, the shark is made with CGI, but the quality of the CGI changes a lot from shot to shot. Scenes of it swimming around and silently threatening the characters look pretty good. But the part where it attacks the jet ski is almost funny in how bad it is. Shark Bait’s kills are the same way. The real-world work is good enough, but the attempts to make the violence more realistic with CGI leave a lot to be desired. Even though Shark Bait isn’t a great movie, it’s better than most recent killer shark movies, so fans of the genre may enjoy it. But most people will find it hard not to fast-forward between the attacks because the story is too similar to others and the characters are not likeable.

Vertical Entertainment has made Shark Bait available on VOD and digital platforms. A Blu-ray and DVD release is planned for sometime in the next few months. In the meantime, FilmTagger gives you a few other things to think about.