This weekend, there is more than one new Bruce Willis movie coming out. Corrective Measures, which is a strange mix of action, prison, sci-fi, and monster movies, also comes out. It’s another Tubi Original, so you might not have heard of it. I can’t think of a worse way for Willis to end his career than to go to work for Rene Perez.

In the first scene of Corrective Measures, a group of thugs led by what looks like a werewolf try to kill a man in a parking garage. The vigilante known as Payback (Dan Payne, Devil in the Dark, Aliens Ate My Homework) kills them all so he can kill the man himself before the police catch him. He’s going to San Tiburon, which seems to be this world’s version of the Vault in the MCU. Only it’s run by a private company, and Warden Devlin (Michael Rooker, Henry: Portrait of a Serial Killer, White Elephant) is just as bad as any of the inmates. With news clips before the credits and an interview with Warden, or Overseer, as he prefers to be called, Devlin tells the audience about the world of Corrective Measures and San Tiburon. The interview also tells us about Julius “The Lobe” Loeb, the prison’s most notorious inmate (Bruce Willis, Die Hard, A Day to Die).

Sean Patrick O’Reilly has made several animated movies like Panda vs. Aliens and Howard Lovecraft and the Kingdom of Madness, but Corrective Measures is his first live-action movie. Based on a graphic novel by Grant Chastain, O’Reilly also wrote the script. I don’t know anything about the book it’s based on, but the first part of the movie is mostly a bland rehash of prison movie tropes with some “mutants” wearing Halloween masks thrown in. The inmates’ superpowers are taken away by “depowering agents,” so for most of the movie they have nothing to do with the plot. What we get is three interconnected stories: Payback’s fight with most of the other inmates, Devlin’s attempts to get Loeb to tell him where his fortune is, and the plight of Diego Diaz, a weak little guy whose only superpower is advanced empathy (Brennan Mejia, The Dead Girls Detective Agency, Kaboom). He is, of course, in the middle of everything when he stops Payback from killing Loeb.

Corrective Measures is a sad movie because, in addition to having a boring and recycled script, the main roles were badly cast. Rooker, who is usually a great actor, is so wrong here that it’s embarrassing. His character is already stupid because he thinks he is some kind of antebellum plantation overseer, but Rooker’s performance only makes it worse. The result is silly, not scary.

Willis, on the other hand, is boring when he should be a little over the top. Mel Gibson’s role in Boss Level required at least a little bit of scenery-chewing in the style of a James Bond villain. I don’t know if he meant for his character to be so resigned and tired of the world, or if Corrective Measures was just another movie he fell asleep during. But no matter what, The Lobe is one of the least interesting bad guys in the history of movies. Tom Cavanagh (The Flash, 400 Days), who plays the now-forgotten supervillain The Conductor in a small but important role, would have been a much better choice. And the story arc of The Conductor would have fit Willis’ short time on screen perfectly. 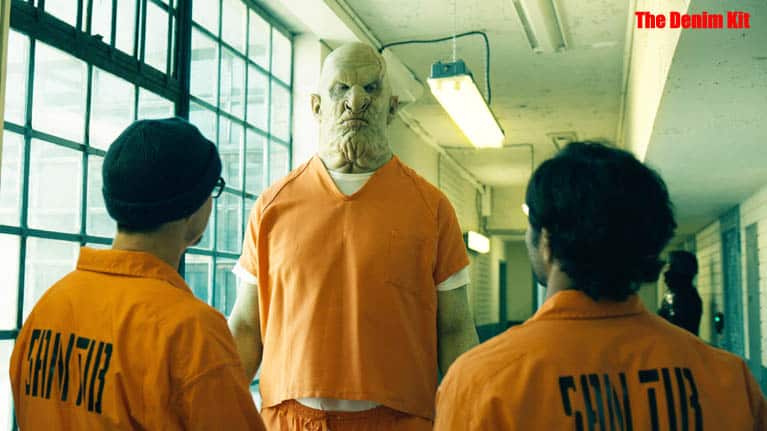 It makes the final act a long, slow slog until the prisoners get their powers back and the expected riot happens. Most of the people in jail deserve to be there, and the guards are cruel jerks, so there’s almost no one to cheer for. And the fights themselves are so well shot that O’Reilly might as well have made them look like cartoons.

Corrective Measures was probably made for the same kind of audience that liked The Boys and Watchmen. The ending and a scene after the credits roll both hints at a sequel or series. But it’s too boring and weak to stand up to them. It’s not the worst of the Tubi Originals, but compared to Die Hard and Moonlighting, it’s a big step down.

There is no cost to watch Corrective Measures because it is a Tubi Original and is available anywhere that Tubi is. FilmTagger has put a few other movies behind closed doors for you to see in case that isn’t quite what you’re looking for exactly.