Since today ends in “Y,” it’s time for a new Bruce Willis movie to come out. This time, it’s A Day to Die. I might have used that line before, but he’s making so many movies that I’m running out of ways to start talking about them. But their quality is getting worse and worse so quickly that I’m starting to wonder why I bother reviewing them at all.

When A Day to Die starts, people are being held hostage. Connor (Kevin Dillon, Poseidon, The Blob) and Mason (Frank Grillo, Boss Level, Jiu Jitsu) are part of a special security team that is called in to deal with a hostage situation at a school involving what look like well-armed militia members. Everything goes very wrong because the police don’t see the guys with RPGs on nearby rooftops. The attackers also had a landmine that destroyed the building and killed a police helicopter that was flying above. Connor was blown out of a window and across the lawn for several hundred feet. 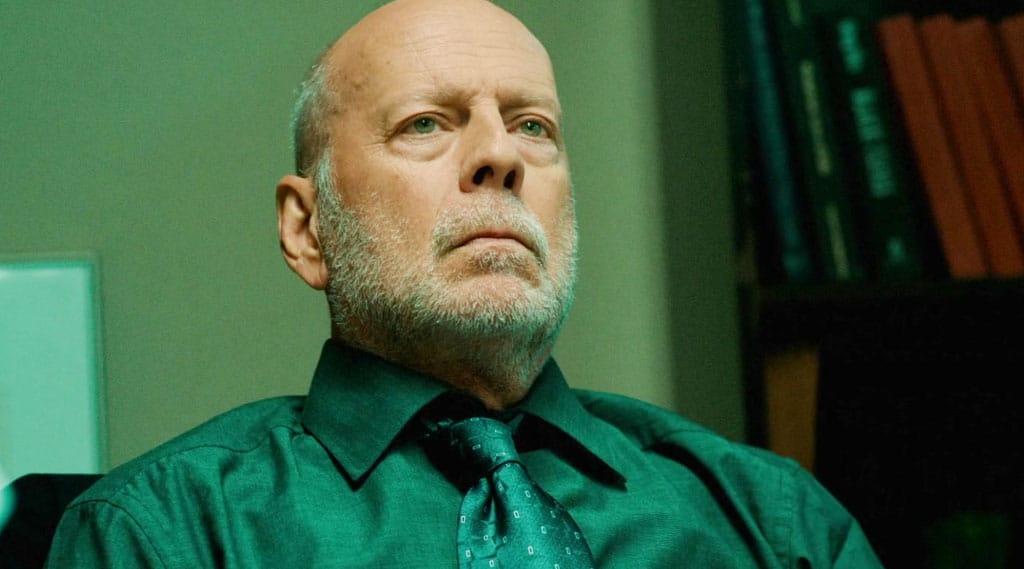 Connor started working as a parole officer after that. When one of his charges is attacked in front of him, Connor steps in and kills the attacker. It turns out that the attacker worked for Pettis, a local drug lord played by Leon (Cool Running, Above the Rim). Pettis is not happy about this and demands that Connor pay him the $2,000,000 the guy was supposed to make him. He takes Connor’s wife, Candace, hostage to make sure he gets the money (Brooke Butler, Lantern’s Lane, The Remains). As the plots of these movies make clear, Candice is, of course, pregnant.

All of this is shot well enough by Wes Miller (Hell on the Border, River Runs Red). But because Rab Berry and Scott Mallace, who also wrote The Tracker, wrote a silly script, it’s hard to take the first massacre seriously, let alone be scared by it. Willis looks more like he wants to take a nap in the few scenes he has as Chief Alston, which doesn’t help the situation.

Since we’re talking about solving problems, Connor needs to find a lot of money quickly since he lost his job. So he asks for help from Mason, Tim (Gianni Capaldi, The Commando, Clown Fear), and the rest of his teammates. If A Day to Die was a movie from the 1980s, they would get their weapons, destroy Pettis and his group, and save Candice. But it’s 2022, so to get the money, they cheat another dealer.

It would be an understatement to call this plot a cliche, but it can still be exciting if it’s done right. Unfortunately, A Day to Die is happy to spend most of its time just rehashing old ideas and never tries to do anything new with them. In the last act, it does take an interesting turn, but it kind of ruins that by giving away too many details that should have been kept secret. But then, if the official synopsis of A Day to Die tells us that Chief Alston works for Pettis, I guess it doesn’t matter if they tell us that in the first twenty minutes instead of waiting until the last act, when it’s more important. But the movie would have been much better if they had.

A Day to Die is an action movie, and it has about the same number of action scenes as the middle of the DTV pack. At an hour and forty-five minutes, it’s a bit long, but it mostly works, even though the beginning is a bit hard to believe. The CGI blood is kept to a minimum, and the scenes are finished. The last fight scene is well done, and the explosions are either real or very well done with computer graphics. Extra points if the last fade-out makes me guess who’s still alive and who’s dead.

Willis is barely in the movie again, and he doesn’t put much effort into the few scenes he does have. He looks bored even when he’s shooting at people. But as a whole, A Day to Die is good enough that I enjoyed watching it. It’s not a must-watch, but it’s one of the better options in its category right now. And I definitely didn’t think I’d be saying that when I started this.